Explore the Appia Antica on your transfer in Rome 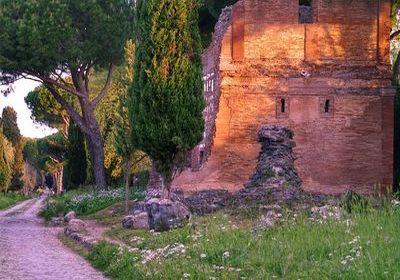 Transferring to Rome. The Via Appia leads south out of Rome, originally all the way to Brindsi. Appius Claudius Caecus, after whom the street was named, began constructing the thoroughfare in 312 BC. This principal road was the best way to transfer goods heading south out of Rome, just as we are your best option to transfer to Rome. The Appian Way is home to several historic and culturally important monuments such as the Porta Appia, which marks the city’s entrance, the churches of St. Sebastian Outside the Walls and Domine Quo Vadis, the entrance to the Park of the Caffarella, and several catacombs!

You could ask your driver to drop you off after you finish your transfer from any port station or airport to Rome at the small church of Domine Quo Vadis. The church takes its name from the Latin phrase, Domine Quo Vadis, which means Lord, where are you going?. St. Peter met the resurrected Christ while the apostle was fleeing Rome, and Peter asked Christ, Lord, where are you going?.  Just inside the door of the tiny church, you can see a copy of Christ’s footprints (the original relic is kept on an altar in St. Sebastian Outside the Walls). Right outside Domine Quo Vadis ,you can enter the lovely park for a delightful stroll to the Catacombs of Callixtus.

Though the Via Appia was a main route in ancient Rome, today it has become narrow and a bit perilous to walk along. The public transportation routes are also complicated. Our transfer service however, can help make your transfers along the Appian Way efficient, easy, and stress free! The Catacombs of Callixus, are well-known for the Crypt of the Popes. Here many of the earliest popes from the first to the fourth century AD were originally buried. Over the years, these popes have become saints, and their remains have been transferred to various sites in Rome. For example, the descendants of Pope Anicetus transferred his saintly remains to a beautiful Renaissance chapel built in their palace, Ancient Roman Art at the Palazzo Altemps. St. Cecilia was also buried here, but her relics were transferred, in 821, to the beautiful church of St. Cecilia in Trastevere. Walk through the charming Trastevere. Ask Rome Transfer’s transfer service from Civitavecchia to Rome to take you there for your next adventure!

What are the catacombs?

These tombs are so far outside the city center of Rome because burials had to be outside the city walls. The catacombs are made out of tuff, a rock that comes from volcanic ash. It is soft and easy to carve, but it hardens after being exposed to air. This quality makes it an ideal material to carve the tombs and burial niches. The catacombs are commonly associated with Christian burial, but they also had baptismal pools, chapels, and places for people to gather and celebrate feast days. The catacombs also preserve much of the earliest Christian art in frescoes, sculptures, and glasswork. They were often painted with frescoes depicting many popular Christian symbols such as crosses, doves, shepherds, and grape vines. Eucharistic imagery and baptismal imagery were very popular because they convey the idea of triumphing over death in the afterlife. If you want to see more catacombs continue through the park to St. Sebastian’s Outside the Walls. Be sure to see the exquisite church where Christ’s original footprints from the Church Domine Quo Vadis are kept. You can also see Gianlorenzo Bernini’s exquisite bust of Christ.

When you are done, ask your driver to pick you up and transfer you to your next destination. For example, you could ask your driver to take you to the tomb of Cecilia Metella, or take you back to the city for a gelato or cappuccino! because is a great idea visit the city eating gelato! Our courteous drivers are here to help you with your initial transfer and all your transfers thereafter.