Rome transfer's service will take you to the Pantheon 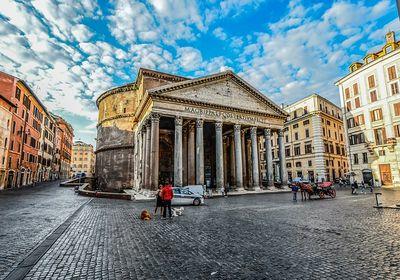 After your transfer to Rome, pay a visit to the Pantheon, one of Rome’s and even Italy’s most popular monuments. The building was dedicated to all the gods, from which it receives its name, though it does not appear to have been strictly a temple. Marcus Agrippa commissioned the original Pantheon building during the reign of Augusts; however it was later destroyed in a fire. Hadrian rebuilt and dedicated the current building in 126 AD, and honored Agrippa’s original building by replacing Agrippa’s original bronze inscription. These differing dates caused scholars a bit of confusion concerning the original building date. The Pantheon’s proportions and design is the epitome of classical architecture. Look for the alternating patterns, like patterns of circles and squares. Notice the alternating triangular and semicircular pediments over the niches. From the pavement, to the walls, to the frieze above these alternating patterns break up the monotony of the Pantheon’s enormous space. Monotony will never be your problem in Rome, as Rome Transfer’s service makes your transfers around the city quick, easy, and hassle free!

The Pantheon’s dome is a perfect half-sphere; the diameter of the dome is 43.3 meters or 142 feet. The height from the floor to the top of the dome is the same, creating a sphere inside a cube! The unreinforced concrete dome is made is the largest ever in the world, even to today. At the top of the dome is an opening, the oculus, which is the only source of natural light. On important days and times, the sun illuminates specific niches in interior. Your time is important during your transfer;  Roma Transfer’s drivers will make sure you arrive at your important destinations promptly to maximize your enjoyment of the city.

Poke around the Pantheon after your journey.

In 609 AD the Pantheon was converted into a church, Saint Mary of the Martyrs. Thanks to this consecration, the majority of the Pantheon remains intact, unlike the Colosseum and many other buildings, which were raided for building materials. The Pantheon’s inspirational made it one of the prime monuments for young artists and architects to study. In fact, the painters Raphael and Annibale Carracci have the honor to be buried in the Pantheon. If you are in Rome for the feast of the Pentecost, go to the Pantheon! After the mass, red rose petals are showered down through the oculus into the interior of the church to symbolize the descent of the Holy Spirit to Earth. It is truly one of the most magical moments you can see in Rome, and only for this specific feast day. Get there early with the help of your Rome Transfer's driver during your travels in Rome. From the Pantheon is easy to reach the Santa Maria Sopra Minerva in a short of time!

If you are tired after your transfer in Rome, stop by the famous bar La Tazza d’Oro before going to the Pantheon. The Tazza d’Oro, founded in 1946, is one of Rome’s most famous bars for its exquisite coffee! During the summer, try one of their famous granita al caffé, a refreshing cold drink made with crushed ice and coffee syrup. At any time, take a break and enjoy a frothy cappuccino and flakey cornetto in the heart of historic Rome. If your friends who couldn’t join you on your trip, you can take home Tazza d’Oro’s coffee in a variety of forms including pods, or purchase an iconic octagonal shaped moka pot, the stovetop coffee pots made famous by Bialetti, with the Tazza d’Oro logo.
Once out of the bar, our driver will be there, ready to guide you through the other monuments, neighborhoods, and restaurants of the city. Rome Transfer facilitate your transportation anytime. Rome Transfer makes your holiday memorable!