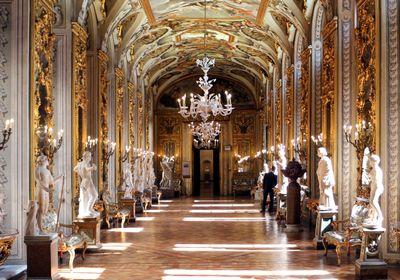 Your transfer in Rome is simple with Rome Transfer’s chauffeur service. Once in Rome, your diver will be happy to help you make your transfers around the city. Take a moment to visit the Palazzo Doria Pamphilj on the Via del Corso. Though many palaces now house museums, the Palazzo Doria Phamphili is one of the few that still has its furnishings. In fact, it is one of the few palaces that is still privately owned. Walking into the museum transports you back to life in eighteenth-century Rome. The collection has several masterpieces by Caravaggio, Raphael, Diego Velazaquez, Gianlorenzo Bernini and Alessandro Algardi.

Art and Scandal at Palazzo Doria-Pamphilj

Taking a tour of Palazzo Doria-Pamphilj is a great way to immerse yourself in the world of Baroque Rome, after you finish your transfer in Rome. The palace and a significant part of the collection were the dowry of Olimpia Aldobrandini on her marriage to Camillo Pamphilj. Olimpia descended from the noble family of the Aldobrandini, to whom Pope Clement VII belonged. Her first marriage was to Prince Paolo Borghese, who descended from the family of Pope Paul V. When Paolo Borghese died, Olimpia was Rome’s most eligible bachelorette, and Camillo Pamphilj left his position as a cardinal in the church to marry her! Camillo’s mother, Olimpia Maidalchini, and his papal uncle, Innocent X, were outraged by this decision. Many works in the collection were transferred from Olimpia Adorbrandini’s estates around Rome to this palace. Through Olimpia and Camillo’s many heirs, the collection passed down through the Pamphilj family, which eventually merged with the Doria family, becoming the Doria-Pamphli. Olimpia Aldobrandini and Camillo Pamphilj also owned the Villa Doria Pamphilj on the Janiculum hill, Rome’s largest park! Rome Transfer’s car service is happy to take you to the park after your gallery tour to breath well while you stroll around the casino Bel Respiro in Parco Pamphilj.

Highlights of the Museo Doria-Pamphilj

Be sure to pick up the audio guide, narrated by one of the members of the Pamphilj family. It is rich with details about the family’s history as well as the art. In fact, he even recalls a few family anecdotes, such as roller-skating on the palace floors with his sister!
As you walk through the museum you will see some paintings by Caravaggio, including his Rest on the Flight into Egypt. Here, Joseph, Mary, and Jesus pause on their way to Egypt, and Joseph holds up a sheet of music for the angel to play. You won’t have to make your transfer to Rome with a donkey though as Rome Transfer’s elegant car service will take you to Rome is comfort and style.

As you pass through the palace rooms to the galleries that wind around the courtyard, you will get to meet Olimpia Aldobrandini! You can see the portrait bust she commissioned when she was seventy years old, showing her in her youth! You too will feel a spring in your step, as Rome Transfer’s service drives you around the city in luxury and style!

You can also meet her mother-in-law, Olimpia Maidalichini, whose portrait bust is exquisitely carved by Alessandro Algardi. Olimpia Maidalchini helped her brother-in-law, Pope Innocent X rise through the papal ranks until he was elected as pope. She continued to be an important political advisor during his papacy. She was even called La Papessa, the female pope.The influence of a woman on the Pope was not well tolerated in the seventeenth century. Algardi’s bust of Olimpia, shows her as a formidable woman with a stern expression. You wouldn’t want to cross this powerful matron.

You will be treated like Italian nobility with  Rome Transfer’s elegant drivers. They will help you with all your transfers around the city. When you have finished touring the palace, you can go shopping on Via del Corso, which runs from Piazza Venezia to Piazza del Popolo.