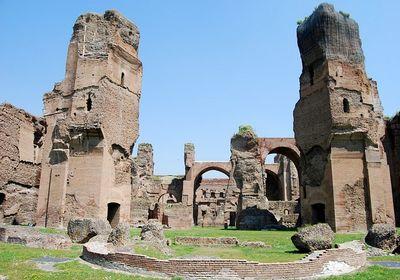 With an area of over 11,000 m², the Baths of Caracalla are one of the largest thermal facilities in Rome, which you can visit after your initial transfer to Rome. In the meantime, enjoy the following short description and start dreaming about this place. Today it is still possible to admire the remains of the immense brick walls of the baths and the fabulous black and white mosaic floors. You can also enjoy a stroll around the grounds and paths, which are bordered by the iconic Roman umbrella pine trees.
The baths had a large central building surrounded by gardens, which were animated by spectacular water jets. The complex also contained gyms, libraries, and local shops.
Once inside, ancient Romans accessed to the apodyterium, namely the lockeroom, where they left their clothes. After pouring oils and ointments over their body, Romans used to perform gymnastic activities, either in the gym or in outdoor gardens. After the exercises, the ritual of real bath began, and it followed a precise sequence. Our chauffeur service takes you from anywhere in or around Rome to discover the Baths of Caracalla, the temple of relaxation during Roman Empire.
At first, the bather passed through gradually heated rooms to increase perspiration reached during training. Then next room the caldarium, which had a large circular hot water bath. The body absorbed moisture from the water and the steam, providing a deep and relaxing bath. The ritual continued by moving to the tepidarium, where tanks with warm water allowed the bather to slowly become accustomed to the lower temperature, until the bather finally reached the frigidarium. Here the bather cooled down and invigorated the body by immersing himself in four basins of cold water. You can decide to enjoy your tour in the Baths of Caracalla and walk where the ancient Romans exercised and relaxed in the rooms mentioned above, thanks to our transfer service in Rome. In case you get tired from the walking tour inside the baths, just sit on the grass under centenary pine trees, have a tasty Italian ice cream and dream about the next place to visit in Rome. Our drivers can bring you from the baths of Caracalla to the Circus Maximus in a short time!

Cultural events organized by Teatro dell’Opera of Roma at Caracalla Bath, under a warm and starry Roman sky

During summer time, the Teatro dell'Opera of Rome takes over the magnificent Baths of Caracalla and offers a festival with a rich cultural and artistic program. An original, exciting, and enjoyable mix of events from classical to pop that includes dance, opera, and rock concerts. Every year the Teatro dell'Opera of Rome ranks among the top sites in Rome both for the amount of media attention and the number of spectators, which exceeded seventy thousand in 2016! In this scenario, your summer nights in the Eternal City will be enjoyable and unforgettable thanks to our transfer service from any location to Rome. We offer more than simply taking you from one place to your chosen destinations. Do not hesitate to contact us. We create a tailor made programme that meets you every need, so that you can have a memorable experience in Rome.