From the airport to Rome to the Capitoline Museum 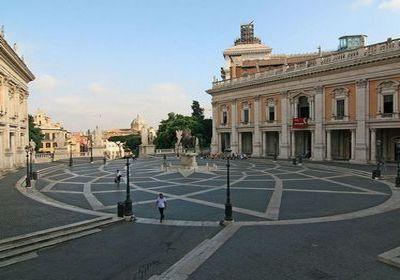 If you are looking for an easy and economical way to transfer from any airport, port or station to Rome, look no further. Our professional drivers allow you to conduct your transfer in style. Once you have arrived in Rome, our chauffeurs will help you with all your transfer needs around the city, including taking you to the Capitoline Museum. There you will find some of the most important pieces of ancient Roman sculpture, housed in two palaces: the Palazzo dei Conservatori and the Palazzo Nuovo. As you enter the courtyard, you will immediately see a colossal head, hand, and foot.  You may even recognize it as the portrait of Constantine. What you might not know, however, is that this statue started out as a giant portrait of Hadrian!

Hadrian’s features are almost completely gone, so how do we know it was Hadrian? Take a look a look at his left earlobe. Do you see that diagonal crease? This is a genetic marker that some people have, and Hadrian was the only emperor to have it represented in his portraits. Because giant pieces of marble are not easy to come by, the portrait was recarved two more times rather than starting from a new piece of marble. When the sculpture was transformed into a portrait of Maxentius, Hadrian’s famous beard was removed, and the hair and features were changed. When it was converted again into Constantine, very little marble could be carved away without ruining the proportions. So Constantine’s long sideburns were carved separately, and then attached at the square holes on the side of his temples. Somewhere in the Capitoline Museum, one of the giant sideburns is being stored. Can you imagine a giant marble sideburn leaning up against the wall?  Don’t worry about being separated from your belongings. With our service you can go to the Capitolin Museum from the museum Centrale Montemartini in a few minutes.With our transfer service, from any location in Italy to Rome, your items will be secure with our drivers.

From the airport to Rome, from hair to there: hairstyles in ancient Roman portraiture

From any airport, port or station to Rome and across the Roman Empire, hairstyles were very important. In official portraits of emperors, exact hair and beard styles were reproduced. For example, all the Julio-Claudian emperors were clean-shaven, but when the dynasty changed to the Flavians, beards came back into fashion. They symbolized a break with the previous dynasty, a return Republican era ideals, and the military prowess of generals. Soldiers often grew beards while away on military campaigns because shaving everyday was more difficult. Men also had carefully styled coiffeurs. These hairstyles could change very slightly over the years from comma shaped curls parting in the middle of the forehead, to just one or two changing directions at the end. Scholars identify and date the portraits of Roman emperors based on their hairstyle, much like we might date a photograph based on fashion today. With our careful drivers, you can make all your transfers to the arrive without a hair out of place.

Women’s hairstyles changed too! One of the most impressive female portraits in the Capitoline Museum is the Fonseca Bust. A towering mass of corkscrew curls rises up over her forehead. This style was probably accomplished with the help of an external hairpiece that was pinned into place. With these curls, any woman from the Flavian period is easy to recognize. Just like today, Roman women added extra hairpieces to create their elaborate hairstyles. Sometimes these additions even had political significance. Livia, the first empress of Rome, was fond of adding the blond and red hair of the Gauls to her own dark Italian locks; these additions stood out and showed that Rome had conquered these lands! If you need help styling your hair for a night out or a special occasion in Rome, We will be happy to take you to a stylist anywhere in Rome.

Take advantage of our services to make all your transfers simple, easy, and enjoyable. Maximize your time in Rome by letting our drivers help you with your initial transfer to Rome, and all your needs thereafter.