Discover the Circus Maximus with our transfer service 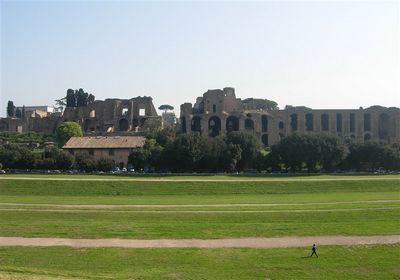 Rome Transfer’s service uniquely offers you the possibility to be driven anywhere in Rome after your journey. The Circus Maximus should definitely be one of your destinations. It was the first and remained largest circus in the Roman Empire, one of the best events spaces even today. It was founded during the last years of the Etruscan age for chariot races, but not until Julius Caesar did it became a real circus. Aside from the gladiatorial games, the competitions in Circus Maximus were the most popular shows for the ancient Romans. Charioteers were treated like idols, much like the footballers of today! Emperors even wanted to imitate them! Team were named and represented by four colors, and their fans set in defined sections on the circus bleachers. Just like today, they cheered their favorites on with chants and slogans. The valley’s large space of the valley also hosted events related to political, social, and religious life of the Rome, such as processions, triumphal demonstrations, and public executions. Don’t miss it after your relaxing journey with Rome Transfer.

The Circus Maximus remained in operation until the early decades of the sixteenth century, after which it was used for farming, followed by warehouses, factories, handicraft businesses, and houses. In the early-twentieth century the Municipality of Rome restored its historical status zoning it as an archaeological area. Your Rome Transfer service from can continue with a guided tour of the Circus Maximus.

Immediately following World War II, the Circus Maximus returned to an archeological park promoting its great historical value worldwide. The most recent archaeological excavations concluded in 2016 and equipped the Circus Maximus with an archaeological path through the same tunnels that led the ancient spectators to the bleachers and the tabernae. These spaces were used as workshops, groceries, stores, brothels, laundries, and even money exchange and betting shops! Enjoy the glitter and show of the Circus with Rome Transfer, and do not hesitate to book your transfer and to the best monuments of the city. If you want to stay longer in the area, there is one more place we recommend you to visit: the Palatinum Hill, where Rome had its origins. Today, it is a open-air museum between Circus Maximus and the Colosseum, covering a whole hill extension. Green grass and centenary pine trees surround temple remains, squares and ancient, majestic villas such as the Domus Augustana and the Domus Flavia. Getting there with your exclusive transfer service is easy thanks to Rome Transfer.

From the Circus to the top of the Aventine hill: scents, colors and magic

Your Rome Transfer service can continue with a walk up the Aventine hill by passing through the Municipal Rose Garden. Here, over than eleven hundred species of roses from all over the world are gathered. Among these are the most famous and particular varieties of the Rosa chinensis, which has green petals, and the Rosa chinensis mutabilis, which changes color each passing day. You will be able to enjoy their beauty and perfume as they bloom from April to June.

There is another place from which you can discover one of the most unique views of Rome: the keyhole of a door that is located in Piazza dei Cavalieri di Malta on the Aventine. Look through the keyhole just as if you were spying into the room beyond, and you will see all of the majestic beauty of the Dome of St. Peter's Basilica!

Thanks to this brief guide, you can see that the area around the Circus Maximus is considered one of the most culturally significant of Rome. Here you can get lost knowing that at the end of your visit you Rome Transfer chauffeur will be at your disposal for any other tour after the longest one. With our service you can reach the baths of Caracalla in few minutes. Discover the city with us!