No trip would be complete without visiting the Colosseum 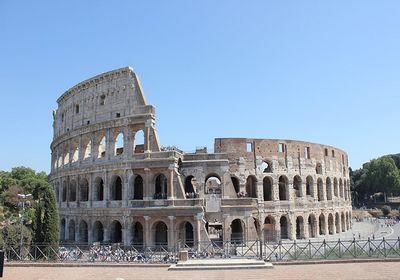 Start your tour after your transfer at the Flavian Amphitheatre, more commonly known as the Colosseum, one of Rome’s most iconic monuments. Its nickname doesn’t come from its enormous size, but rather the colossal statue of Nero, which stood near the entrance to the emperor’s massive palace the Domus Aurea or Golden House. After Nero’s fall and the ensuing civil war, Vespasian reclaimed Nero’s luxurious palace and began building the amphitheater over the palatial lake in 72 AD. His son, Titus, completed the amphitheater in 80 AD. Following Titus’ death, his brother, Domitian, further modified the Colosseum and also built the stadium in Piazza Navona. During your tours, your driver can transfer you to the stadium after your excursion at the Colosseum. You can ask our drivers to bring you from Colosseum to Rione Monti.

Visit the Domus Aurea during your expedition

Transferring in Rome is easy with Rome Transfer, whose drivers will take you to the Domus Aurea to begin your tour.  Make sure you reserve your tour in advance and bring a jacket; this underground archeological zone is chilly even in the middle of summer! Nero maybe the most infamous emperor of Rome; you may have heard the saying “Nero fiddled while Rome burned,” referring to the great fire of 64 AD. This reputation comes in part from the extravagant palace he built out of concrete on the Palatine hill that has been estimated to cover between one and three hundred acres. It was decadently decorated with gold leaf, mosaics, and paintings, which you can see on your guided tour of the three hundred-room palace. Outside of Pompeii, this in one of the few places you can see Roman architecture with their wall paintings and mosaics intact. After Nero’s death the palace’s materials were transferred to other buildings, parts of it were razed to build Trajan’s Market, and the Colosseum. The colossal bronze statue of Nero was transferred to the new amphitheater. You can cruise in the luxury worthy of an Emperor of Rome with Rome Transfer’s service. Our staff is highly qualified to make your travel a peaceful journey.

Cruise to the Colosseum with Rome transfer service in Rome

The Colosseum held sporting events, gladiatorial combat, and could even be flooded to stage mock sea battles! On average sixty-five thousand people attended the spectacles including the Emperor of Rome, nobles, Vestal Virgins, merchants, and peasants. The amphitheater is spectacular in the late afternoon light. As you wander around inside you can still see remnants of the marble seats.  There was also a giant awning, called the Velarium, that could provide shade from the hot summer sun. The awning could be shifted to transfer the shade as the sun moved during the day.

The Colosseum is a beautiful example of the classical architectural style featuring the heaviest Doric order on the bottom, followed by the Ionic order, and then lightest Corinthian order. During the Middle Ages and Renaissance, many of the amphitheater’s materials were scavenged and repurposed for other buildings, a practice known as spolia. During your journey, keep an eye out for these orders and repurposed materials.

At the end of your tour, you can relax in the shade of a tree on the Oppian Hill Park, a public garden with fountains, sculptures, green grass and statues. We recommend to take the central avenue that leads down the hill to the Colosseum to enjoy the attractive view on the ancient theater and the surrounding area, including  the Arch of Constantine. However, if your feet are weary and the sun is setting, Rome Transfer’s transfer service in can take you to your hotel to rest before going out to dine at some of Rome’s tastiest restaurants. Don’t forget, your ticket for the Colosseum also transfers to the Palatinum Hill and to the Imperial Forum of Rome. Your Rome Transfer driver can take you there so you can maximize your time in the Eternal City.