Transfer from anywhere in Rome to the museum Centrale Montemartini 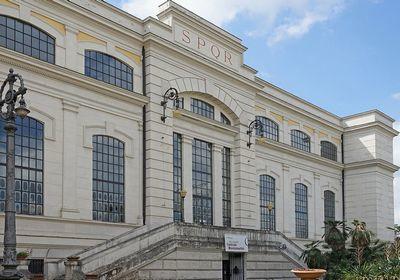 When making your transfer to Rome, make sure to drop by Centrale Montemartini in Testaccio. This old electric plant was converted to a museum featuring ancient Roman art. This museum is not featured on most touristic itineraries, but it is well worth a visit for the Roman art, the history of the power plant, and the interesting juxtapositions created from these two diverse functions. The museum is outside of Rome’s historic center, so take advantage of our transfer service in Rome to take you to this unique and fascinating museum.

Inaugurated on the 30th of June 1912, Centrale Montemartini served as Rome’s first public power plant. It continued to provide electricity for the city until 1963 when the plant was decommissioned and the gallery was transformed into a temporary an art space in the 1980s. In 1997, art works from the Capitoline Museum’s collection of art of ancient Rome was displayed at Centrale Monetmartini in a temporary exhibition called Machines and Gods. Almost every museum has more works of art than can be displayed, and the Capitoline Museum is no exception. The exhibition permitted the museum to display more of its important artworks, and it was a success! In the late 2000s the power plant was restructured to become the permanent home for several of these fascinating art works. You will see sculptures, mosaics, jewelry, glass, and even furniture!

The machinery of the original power plant is still in place, especially in the Boiler Room and the Machine Hall. These halls create a fabulous contrast between ancient statues carved by hand modern machines.

Even though your journey from your arrival location to Rome is easy with our transfer service, exploring the Centrale Montemartini museum can stimulate your mind and help you shake out your legs! In the Hall of the Columns you’ll see the famous Barberini Togatus. Togatussimply means a figure wearing a toga. Remember the Barberini name; it belonged to the family of Pope Urban VIII and you’ll hear it again during your transfers around Rome. Though it may look like the Togauts is holding a pair of busts, these are probably wax masks depicting his ancestors. Ancient Romans wore masks of their ancestors in funerary processions to keep their memory alive. Whichever relative most resembled great-grandpa Marcus would wear his mask and embody him in the funerary procession.

You can’t miss the colossal head of Fortuna, or her foot or hand. She would have been depicted seated, and measured over eight meters tall! She originally belonged to the Republican temples at Largo Argentina. You can see the sunken remains of these temples, which undoubtedly are covered in cats, as this site also is one of Rome’s cat sanctuaries. This statue, like all roman statues, would originally have been painted to make them seem more life like. Lips, eyes, cheeks, hair, and clothing were all painted with rich details to make the sculptures appear even more life-like. Fortuna’s head, arms, and feet were carved out of stone and would have been painted to resemble gold or ivory. The rest of her body would wood and hidden under cloth; this style is called acrolito; it is similar to the statue of Athena in the Parthenon in Athens.

Enjoy your time wandering around the museum! When you have finished your visit, our Roma’s transfer service is ready to whisk you away to your next destination!

St. Paul’s Outside the Walls

When you exploring the monuments in Testaccio, we will help you transfer to the Basilica of St. Paul’s Outside the Walls. This Basilica was built over the tomb of St. Paul and was one of the seven basilicas pilgrims would visit during Jubilee Years when seeking indulgences. It was built in 386 and was heavily modified in the late-sixth century. In 1825, however, a fire destroyed most of the original church Today you mostly see the reconstructed church from the mid-nineteenth century. Our drivers will be waiting for you to take you to your next destination anywhere in Rome!