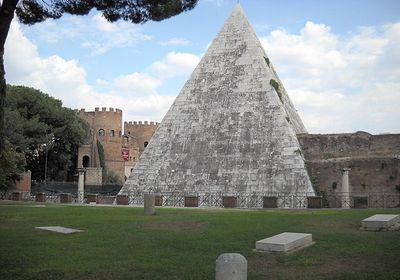 When making your transfers in Rome stop by the Non-Catholic cemetery located by the pyramidal tomb of Cestius in the neighborhood of Testaccio. The cemetery is the final resting place for many painters, poets, architects, diplomats, and scholars. It began being used in 1716 when Pope Clement IX allowed exiled Stuarts from England to be buried in front of the pyramid. Though it started as a place for Protestant burials, many faiths are now represented in the cemetery. The Non-Catholic cemetery is a peaceful and charming spot to take a stroll and enjoy a different side of Rome’s culture after your transfer.

Rome Transfer will help you with all your transfers and pick you up from any port or station, including Ostiense station next to the Non-Catholic cemetery. This historical cemetery is fun to explore and contains two main sections. The first is located at the primary entrance and contains rows of elaborate tomb monuments on an upward sloping hill lined with Italian cypress trees. The cemetery continues to the left with a second more open and spacious section. As you continue around to the back you will come to the tombs of the well-known English poets, John Keats and Percy Bysshe Shelley. Take a moment to admire the tomb inscriptions, though Keats’ tomb bears only the name A Young English Poet. If you would like to know more about Keats’ life in Rome, your driver can easily take you to the Keats-Shelley House at the Spanish Steps to see where he died in 1821.

Before you finish your tour of the cemetery, head to the back of the first part of the cemetery to see a beautiful tomb with the sculpture of a weeping angel. The sculpture is called the Angel of Grief , and is a powerful tribute by the American sculptor William Wetmore Story for his wife Emelyn. The sculpture moves the viewer to experience Story’s profound grief over the loss of his beloved wife. The viewer comes upon the angel in a seemingly private moment, collapsed over the tomb of Emelyn Story over come with sorrow.

The Pyramid of Gaius Cestius

As you travel to the quarter of Testaccio go to see the pyramid tomb from 12 BC belonged to Gaius Cestius. According to Roman tradition, all graves were located outside the walls of Rome, The Roman Empire acquired Egypt in 31 BC with the defeat of Anthony and Cleopatra. Gaius Cestius was therefore following the newest trend, as it were, by incorporating an Egyptian theme in his tomb. This was a very effective strategy because the Roman afterlife depends on being remembered after death. Gaius’ tomb is still standing, and we still remember him and talk about him over two thousand years later, keeping his memory alive. As the city of Rome expanded his tomb was built into the Aurelain walls between 235 and 285 AD when the Rome’s population was over one million inhabitants. As you wander around the pyramid and cemetery, you may notice several cats sunning themselves or hunting prey. This is because the Pyramid of Gaius Cestius also doubles as one of two cat sanctuaries in Rome. The other is in Largo Argentina. If you would like to know more, ring the bell and the volunteers will tell you about their mission.

Close to Pyramid, you will find a district called Testaccio which nowadays is home to a huge museum, a market area and a modern space called The City of the Alternative Economy. On Saturdays and Sundays, local people, especially families, gather here to attend different social events organized by the local communities: concerts, festivals, organic markets and conferences are part of a comprehensive programme. If you want to mix with locals and spend the weekend like a true Roman, ask the Rome Transfer driver to take you there!