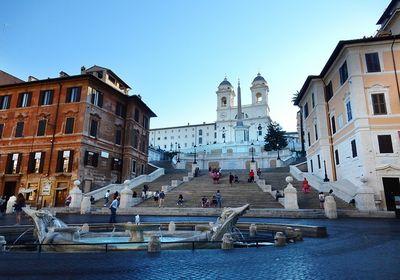 Sight seeing and shopping is relaxing and easy with Rome transfer’s limousine service. From the church of S. Trinità dei Monti at the top, to the magnificent staircase, to Bernini’s marvelous fountain at the bottom, the Piazza di Spagna is one of the most picturesque spots in Rome. The area also is home to some of Rome’s most luxurious boutiques. The area is named for the Spanish Embassy that was found in the piazza below. Before Francesco de Sanctis designed the Spanish Steps in 1717, the steep slope from the piazza to the church was simply dirt. There were several attempts to design a staircase over the years, including one by the famous sculptor Gianlorenzo Bernini. He even proposed placing an equestrian statue in the middle of the hill leading to the French national church, but the Spanish didn’t like the idea of the French king looking down on them!

The Spanish Steps is a great place to relax after your transfer in Rome. One hundred and thirty-five steps make up the magnificent staircase. At anytime of the day or night you can find locals and tourists resting on the stairs, enjoying the sunshine and a gelato, or simply engaging in the national Italian pastime, people watching! If you fancy a cup of tea, go sample the delectable brews at Babington’s Tea House. Two English sisters, Isabel Cargill e Anna Maria Babington, founded this charming establishment, in 1893.

Boats! From your ship to Rome and its fountains with Rome Transfer

From the cruise ships to Rome and its sculptures boats abound! The fountain at the bottom of the steps is Bernini’s Barcaccia. If you think it looks strange for a ship, you’re right! In fact the name means Ugly Boat. Supposedly in 1598, a little boat was left stranded in Piazza di Spagna after the Tiber flooded. The fountain’s water, like the Trevi, is transferred via the Acqua Vergine, an underground aqueduct with little pressure to create the spectacular jets. Bernini cleverly lowered the basin so the water jets would appear higher. You can walk onto the stepping-stone, brace yourself against the fountain, and drink the cool water that pours out of its spouts. See the three bees on the shield? Keep an eye out for these guys in Rome, especially St. Peter’s; they refer to the Barberini family and Pope Urban VIII. If you spy them, you will know the Barberini sponsored the monument.

At the bottom of the steps is the Keats-Shelley house, where the Romantic poet John Keats lived, until his untimely death at 25 from tuberculosis in 1821. In 1906 the house was purchased for the Keats-Shelley Memorial Foundation. If you would like to see more of Keats and Shelley in Rome ask your Rome transfer's driver to take to you the Non-Catholic cemetery as you continue your journey.

Do you like history, sculpture, and eating? Ask your driver from Rome transfer’s service to take you the Canova Tadolini Workshop Museum. Here, Antonio Canova collaborated with his best pupil Adamo Tadolini. The workshop remained in the Tadolini family until 1967. Today, it is a restaurant where you can dine for lunch or dinner among myriad statues and models by Canova and Tadolini. It is a whimsical place to have a cup of tea or a meal and stimulate your mind and appetite after your long transfer in Rome.
Close to the Spanish Steps, you can find one of the most popular streets where shopping reigns supreme. It is Via dei Condotti, where prestigious boutiques with the top Italian brands such as Gucci, Valentino and Dolce&Gabbana are lined side by side. Thanks to our transfer service, you can purchase in as many shops as you want, knowing that there is a Rome Transfer's car waiting for you at the end of your shopping tour.