Rome Transfer service takes you to Vatican City, the heart of Catholicism 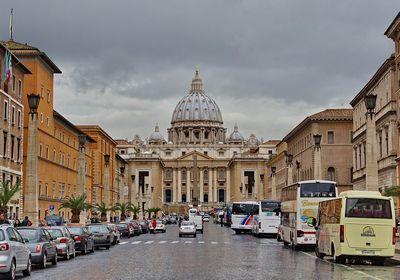 After you transfer in comfort and style, visiting the Vatican and St. Peter's Basilica can be a great way to stimulate your mind. Rome Transfer will be happy to take you to the museum’s entrance and recommends you book your ticket in advance. The museum can be crowded, but if you keep your route flexible you can easily transfer from one room to the next avoiding the largest crowds. Rome Transfer’s service allows you to maximize your time in the Eternal City.

Upon entering the Vatican museums you will enter the Belvedere Courtyard, which was begun in 1506 and designed by Bramante. The long courtyard connected the Vatican Palace with the Villa Belvedere, where the pope transferred his residence for the summer and enjoyed a fresh breeze in the smaller palace.

When you enter the courtyard, there is a nice café where you can sit and have a coffee and a bite to eat and enjoy the scenery after your travel. You may notice a large bronze pinecone. The Pigna is an ancient Roman fountain that was originally near the Pantheon and was transferred to the courtyard of the Old St. Peter’s and then to the Belvedere Courtyard. The courtyard was bisected in 1585 to build the Vatican Library. The wings surrounding the courtyard house the various branches of the Vatican museum, such as the Pinacotheca, Egyptian Art Galleries, and the Etruscan Museum.

Many works of ancient Roman art were transferred to the Vatican museum from find spots all over Lazio from the ports of Ostia to the center of Rome. Laocoön and His Sons  was the first sculpture that began the museum’s collection. The sculpture was discovered near the Basilica of Santa Maria Maggiore in 1506, purchased by Julius II, and put on display in the Octagonal Courtyard, or the Little Belvedere Courtyard. Michelangelo was commissioned to sculpt the father’s right arm, which had broken off and was missing. The original arm was later found and attached. The Apollo Belvedere was transferred to the courtyard in 1511 from its find spot in Anzio. You may see some similarities between this Apollo and Bernini’s in the Galleria Borghese. The Belvedere Torso was also displayed in the courtyard. Together these sculptures inspired many artists.

The Raphael rooms and the Sistine Chapel

Enjoy exploring all the galleries in the museum while Rome Transfer’s limousine service waits for you. Don’t miss the four Raphael Rooms, commonly called the, Stanze. These were intended as the living quarters for Pope Julius II and his successor, Pope Leo X. They look out on the Belvedere Courtyard. The most popular of these frescoes is the School of Athens. In this painting,  the best known and most popular philosophers of history are portrayed. There are fifty scholars and philosophers of the classical age in the composition, such as Aristotele and Plato. Raphael decided to portray them with the characteristics of contemporary artists, such as Leonardo da Vinci or Raphael himself. This was to underline the strong link existing between the classical ancient age and the Renaissance.

Finally, before leaving the museum you will pass through the awesome Sistine Chapel, which takes its name from Pope Sixtus IV who restored it. Later, Pope Julius II commissioned Michelangelo to paint the ceiling between 1508-1512.  The artist returned from 1535 to 1541 to paint the  Last Judgment  on the wall behind the high altar. If you look at the figure of Christ, you will see that the Belvedere Torso inspired Michelangelo.

When you have finished your tour inside and around Vatican Museums, you have the option to explore St. Peter’s or Rome Transfer’s service will help you transfer to your next destination, be it shopping, dining, another museum or a stroll at the charming Villa Doria Pamphilj.