The best way to see the sights is while eating gelato! 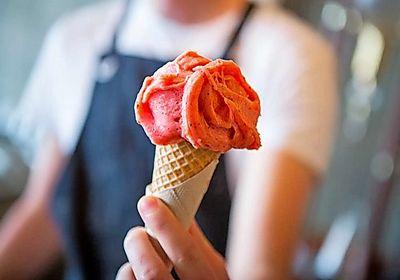 If you need a pause to refresh during your transfer in Rome, stop for a gelato and some people watching. It seems like everywhere you turn in the historic center of Rome, there is a gelateria, but how do you choose the right one? A shop boasting gelato artiginale, means their gelato has been made by hand, and is likely to be particularly tasty! Here are some ideas and places to keep in mind on your gelato tasting tour.

Some tips and tricks to select the best gelato

What is the difference between ice cream and gelato? Well, there are several things in the way it is made, frozen and served, but a large part comes down to cream versus milk. Ice cream uses a lot of heavy cream and often egg yolks to give it that creamy texture; gelato tends to use milk and generally does not include eggs. Milk has a lower fat content than heavy cream, so you can eat up worry free, just as your transfer are stress free with Rome Transfer’s chauffeur service!

You may notice that gelaterias have different colored spoons to serve the gelato. These indicate which flavors have milk and which don’t. The milk free flavors tend to be sorbets. You can also try granitas, a slushy crushed ice treat. Everyone can enjoy delicious gelato during your wander-ings.

Italian food offerings vary according to the seasons, and gelato is no different. As different fruits ripen, gelato flavors change accordingly. There are classic tastes such as coffee, chocolate, hazel-nut, and pistachio; or you could sample their specialties like tiramisu and salted caramel. They al-so show you the fruits that are in season. In the winter you will find citrus fruits like mandarin and lemon, in the spring strawberries and cherry flavors arrive, and in the summer you can try delicious fig flavors! Rome Transfer can help you coordinate your gelato tasting stops during your transfers.

Gelaterias not to be missed on your gelato tasting tour with Rome Transfer!

Try keeping a photo log of the gelato shops, flavors, and combinations your try as you travel. The following are a few particularly well-known gelaterias you might want to sample.

Gelateria Giolitti is one of the oldest in Rome. Giuseppe and Bernadina Giolitti founded the creamery in 1890, and they even supplied the royal family of Italy with milk. Nazzareno and Giuseppina Giolitti opened the flagship gelateria on Via dei Uffici dei Vicario 40 a few years later. Over the years a host of celebrities have savored the delectable treats at Giolitti’s! Located in the heart of historic Rome, between the Pantheon and the Trevi fountain, be sure to stop by a for a treat.

Fatamorgana is the professional name of Maria Agnese Spagnuolo, who turned to her life-long passion of gelato making in 2002. Her love for gelato started at the age of fourteen when she bought an old cookbook of traditional Italian gelato recipes. Like the best gelato, Fatamorgana makes her treats with completely natural ingredients, and she delights in creating unique and in-teresting flavors. Her special Fatamorgana creations include Basil, Walnut, and Honey; Black Cherries and Beer; Goat Cheese and Citrus; and Pineapple Ginger.

Stefano Marcotulli and his partner opened their Gelateria del Teatro in 2006, and moved to a larger location in 2013 on Via dei Coronari 65/66, a few steps from the Ponte Sant’Angelo. Here you will find more curious combinations like Rosemary, Honey, and Lemon, Pistachio from Bronte and even Strawberry from Terracina. There are bistro tables out side and the neighborhood also has a nice set of stairs where you can sit and eat. Just remember to be respectful to the residents who live there.

Rome Transfer will help you make the most of your vacation after your transfer in Rome by maximizing your time and making sure you can try all the gelato flavors and combinations you care to sample!